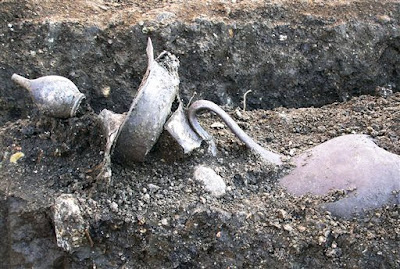 The burial vessels found in Aigai, one of which contained human remains.
Archaeologists have unearthed a lavish burial site at the seat of the ancient Macedonian kings, pointing to a 2,300-year-old mystery of murder and political intrigue. The find in the ruins of Aigai in northern Greece is only yards from last year's discovery of what could be the bones of Alexander the Great's murdered teenage son.

According to the Associated Press:

Archaeologists are puzzled because both sets of remains were buried under very unusual circumstances: Although cemeteries existed near the site, the bones were taken from an unknown first resting place and re-interred, against all ancient convention, in the heart of the city.

Excavator Chrysoula Saatsoglou-Paliadeli said in an interview that the bones found this week were inside one of two large silver vessels unearthed in the ancient city's marketplace, close to the theater where Alexander's father, King Philip II, was murdered in 336 B.C. She said they arguably belonged to a Macedonian royal and were buried at the end of the 4th century B.C.

But it is too early to speculate on the dead person's identity, pending tests to determine the bones' sex and age, said Saatsoglou-Paliadeli, a professor of classical archaeology at the Aristotle University of Thessaloniki.

Saatsoglou-Paliadeli believes the teenager's bones found in 2008 may have belonged to Heracles, Alexander's illegitimate son who was murdered during the wars of succession around 309 B.C. and buried in secret. The remains had been placed in a gold jar, with an elaborate golden wreath.

Click here for the complete AP article.
Posted by Gregory LeFever at 6:42 PM