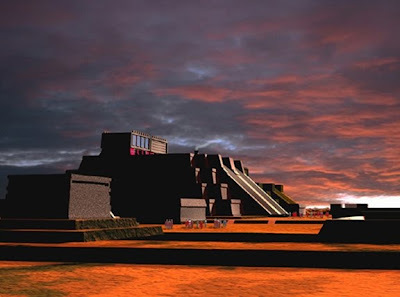 Digital visualization of Templo Mayor prior to destruction. 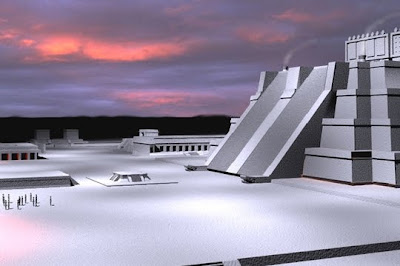 Templo Mayor plaza viewed from the Temple of the Sun.
Digital images now provide what is considered a reasonable concept of the appearance of a spectacular 16th century Aztec temple in what is today Mexico City.

Antonio Serrato-Combe, professor of architecture at the University of Utah, devoted two decades to digitally recreating ancient structures of the Aztecs. His major accomplishment is the construction of the Templo Mayor Precinct in Tenochtitlan, in what is modern day Mexico City. Destroyed by Hernando Cortes in 1521, the Templo Mayor was the center of Aztec ceremonial life and served as the setting for highly energized rituals.

The question of what the Aztec Templo Mayor Precinct looked like has piqued the curiosity of many, including Serrato-Combe. For more than two decades, he has been trying to solve the mystery on how the capital of the Aztecs looked by using the technology and tools of architecture.

"The Aztec capital was a thriving metropolis planned and built according to principles that not only understood and applied critical environmental issues, but added holistic concepts as well," explains Serrato-Combe. "The Aztecs did not compartmentalize the arts. The final result was a unique combination of architecture, sculpture, painting, costume, wall and sand painting, pottery, masks, amulets, all into one expression. I envy those individuals who had the opportunity to experience those environments."

Combe's research and visualizations are centered on historic and archaeological studies conducted on-site in Mexico City, in conjunction with additional extensive research, very time consuming, due to the complexity and diverse nature of the historic and archeological record.

Click here for the PhysOrg.com article with larger images. 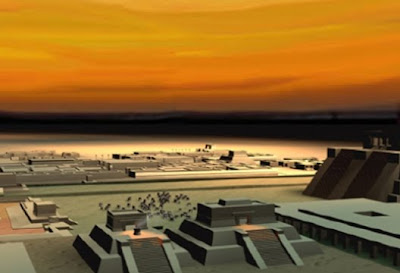 View from top of Huitzilopochtli shrine.
Posted by Gregory LeFever at 12:02 PM

I still need to watch Apocolypto, you just kinda reminded me of that. Sorry typing out loud!