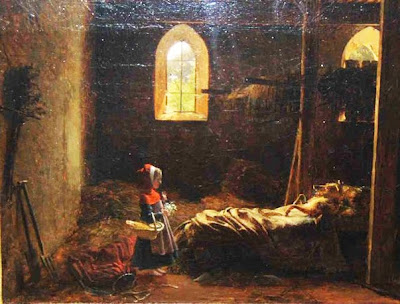 Using research techniques more commonly associated with biologists ~ called a taxonomic tree of life ~ anthropologists are able to explore these stories' origins in various cultures through various time periods. For example, Dr. Jamie Tehrani, a cultural anthropologist at Durham University, has studied 35 versions of Little Red Riding Hood from around the world. According to the London Telegraph:

Whilst the European version tells the story of a little girl who is tricked by a wolf masquerading as her grandmother, in the Chinese version a tiger replaces the wolf. In Iran, where it would be considered odd for a young girl to roam alone, the story features a little boy.

. . . He said: “Over time these folk tales have been subtly changed and have evolved just like a biological organism. Because many of them were not written down until much later, they have been misremembered or reinvented through hundreds of generations. By looking at how these folk tales have spread and changed it tells us something about human psychology and what sort of things we find memorable.

“The oldest tale we found was an Aesopic fable that dated from about the sixth century BC, so the last common ancestor of all these tales certainly predated this. We are looking at a very ancient tale that evolved over time.”

Tehrani has identified 70 variables in plot and characters between different versions of Little Red Riding Hood. The original ancestor is thought to be similar to another tale, The Wolf and the Kids, in which a wolf pretends to be a nanny goat to gain entry to a house full of young goats.

Click here for the Telegraph.com article.
Posted by Gregory LeFever at 8:02 PM