Anglo-Saxon Treasure is a Mystery 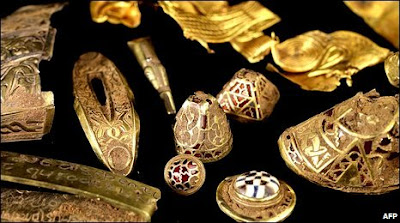 Sample of the huge stash of Anglo-Saxon precious-metal objects.
Terry Herbert’s spectacular find with a metal detector of the largest known stash of 7th century Anglo-Saxon gold and silver has rocked the world of archaeology, and more details are being released with each passing day. The find was disclosed last week.

Herbert had been wielding his metal detector for 18 years and in July was searching land in South Staffordshire belonging to a farmer friend.

"I have this phrase that I say sometimes: 'Spirits of yesteryear take me where the coins appear,’ but on that day I changed ‘coins’ to ‘gold,’" he recalls. "I don't know why I said it that day, but I think somebody was listening and directed me to it.”

He found an estimated 1,500 gold and silver pieces, making it the largest discovery of Anglo-Saxon gold yet recovered.

What Is It?
“For the Anglo-Saxon period, this is an awful lot of wealth for one person, or even one people, to have left in one place,” says Dr. Michael Lewis of the British Museum. “At the moment, we can say what it isn't, even if we can't say what it is. It's not associated with a burial, like Sutton Hoo was, for example.

“After that, there are two main possibilities,” he continues. “The first is that this treasure has been purposefully deposited, like an offering to a god. But, from my 21st-Century perspective, I find it bewildering that someone could shove so much metalwork into the ground as an offering. That seems like overkill.

“The other possibility is it's a treasure chest that got lost, or they couldn't come back for it,” Lewis says.