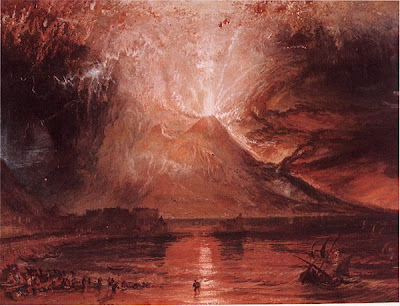 'Vesuvius in Eruption,' by J.M.W. Turner, 1817.
A surprising number of birthplaces of ancient civilizations were on geological fault lines, making the locations more prone to active volcanoes, earthquakes and the large water springs that run parallel to seacoasts.

Archaeological geologist Eric R. Force of the University of Arizona in Tucson overlaid the locations of plate boundaries and the founding cities of thirteen ancient civilizations, according to Natural History magazine. Eleven of the thirteen fell within 120 miles of the Eurasian plate's southern boundary—too many and too close to be just coincidence.

Among the eleven cities were Rome, Corinth, Mycenae, Jerusalem, Ur in Iraq, and Hastinapura in India. The two exceptions were Memphis in Egypt and Zhengzhou in China.

The collision of tectonic plates can cause a number of geological cataclysms, some of which would obstruct cultural advancement, while others may help. Still, the reason why civilizations tend to arise near tectonic boundaries remains subject to speculation.

Making Way for the New

Force points out one intriguing possibility: that frequent shake-ups by earthquakes, tsunamis, or other natural disasters destroy the old, making way for improved infrastructure and new customs.

The seats of civilizations that sprang from older civilizations hugged tectonic lines more closely than the seats of self-generating societies, he found. Similarly, the farther a civilization was from a boundary, the longer it endured. The findings were detailed in the journal Geoarchaeology.

Posted by Gregory LeFever at 6:56 PM