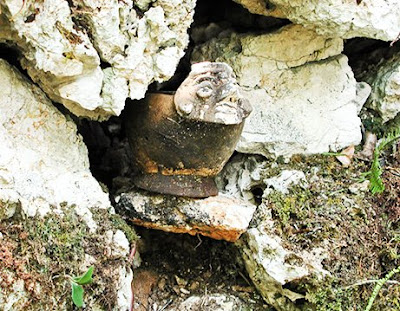 A Lacandon Mayan 'god pot' traditionally used as an incense burner, probably as recently as 100 years ago, found in a 500-year-old temple in Chiapas, Mexico.


Researchers have confirmed that a mysterious people living deep in the rainforests of southern Mexico and Guatemala are the unconquered Maya. These indigenous people fled to the rainforests when the Spanish first arrived in the Yucatan in 1511.

In 2006, archaeologist Joel Palka and Fabiola Sánchez Balderas, president of the Maya culture and conservation organization Xanvil, returned to the area to map the ancient Maya sites and investigate sacred rock art and cave shrines at Lake Mensabak in the southern Mexican state of Chiapas. What they found was evidence of an ancient settlement of Lacandon Maya, a group that had long been overlooked and ignored by archaeologists, according to Palka.

Descendants of the unconquered groups still live there today. The current residents of Mensabak are modern Maya who, unlike some of their ancestors, have had contact with outside communities.

"The lion's share in Maya archaeology has been devoted to research on the tombs, temples, and awe-inspiring finds of Classic Maya civilization," Rani Alexander, an archaeologist at New Mexico State University, told National Geograpic magazine.

Palka, now at the University of Illinois in Chicago, and Sánchez Balderas surmised that the ancient sites and shrines they uncovered in 2006 at Lake Mensabak belonged to Classic Mayans from 600-800 AD and Historic Mayans from1525-1950 AD.

The "ancient" Maya that locals said were in Guatemala until the 1920s were actually post-conquest Maya who resisted assimilation. After the 1920s some adopted new lifestyles while others, such as the Lacandon, slipped across the border into Chiapas and held tight to tradition.

“The most surprising element is that much of the culture and behavior from pre-contact Maya culture continues to the present, including stone tool use and head-shaping," said Palka.

Posted by Gregory LeFever at 1:11 PM

That was an interesting article. I wasn't awhere that the Maya did head-shaping. Here's a strange thought ha could their head-shaping have caused aberrations from time to time and produced savants? It might also be the main cause of their devolution. lol