Sections of Great Wall are Disappearing 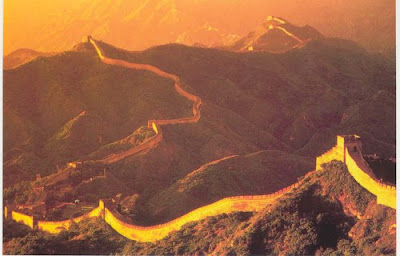 Some 20 percent of the Inner Mongolian stretch of the Great Wall of China has disappeared, archaeologists said this week. The affected stretch is about 98 miles long. In recent centuries, the Great Wall ~ built in the Ming Dynasty (1368-1644) ~ has been damaged by weather and human activities, leading to the disappearance of some sections.
The Great Wall was China's line of defense. Different sections meander across thousands of miles, passing through many provinces and autonomous regions, including Gansu, Ningxia, Inner Mongolia, Shaanxi, Shanxi, Hebei and Liaoning in north China.

Construction began during the Warring States Period (475-221 BC), when sections were built in scattered strategic areas. The most visually striking part is generally considered to be a well-preserved 4,000-mile section from the late Ming Dynasty.

Click here for the Xinhua News Agency article.
Posted by Gregory LeFever at 11:03 AM