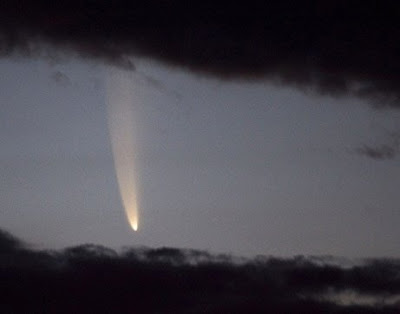 Multiple comets slamming into Earth about 1,500 years ago triggered a "dry fog" that plunged half the world into famine, scientists now say.

From the beginning of March 536 AD, a fog of dust blanketed the atmosphere for 18 months. During this time, "the sun gave no more light than the moon", global temperatures plummeted and crops failed, Dallas Abbott of Columbia University's Lamont-Doherty Earth Observatory in New York told New Scientist.

Abbott and her team have now found the first direct evidence that multiple impacts caused the haze. They found tiny balls of condensed rock vapour or "spherules" in debris inside Greenland ice cores dating back to early 536 AD. Though the spherules' chemistry suggests they did not belong to an impactor, they do point to terrestrial debris ejected into the atmosphere by an impact event, Abbott says.

"This is the first concrete geological evidence for an impact at 536 AD," she says.

The fallout material was also laid down over several years, and some layers were particularly densely deposited. This suggests more than one impactor was involved - probably a comet, because they tend to fragment on their way to Earth.

Scientists have identified two possible underwater craters whose age ranges fit the global dimming event. The first appears to have formed when an object roughly 640 metres wide slammed into the Gulf of Carpentaria in Australia, and the other when a smaller object crashed into the North Sea near Norway.

Click here for the New Scientist article.
Posted by Gregory LeFever at 11:08 AM