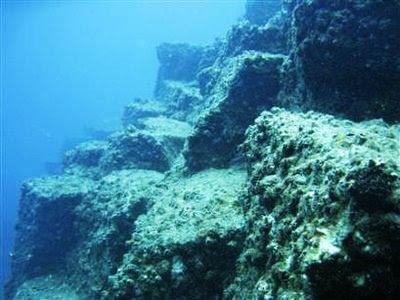 Section of the wall formation in the Taiwan Strait.

A biodiversity researcher has discovered a huge basalt rock formation in the Taiwan Strait, resembling a city wall and rivaling similar monoliths on land. The 200-meter-long, 10-meter-high undersea wall ~ resembling thousands of pillars packed together ~ is near the Pescadores archipelago, researcher Jeng Ming-hsiou said on Monday.

Jeng was diving in the area when he saw and filmed the wall 25 miles west of Taiwan's main island. "It was completely unexpected," he told Reuters. "It's not easy to see these formations underwater."

Basalt walls such as the famed Giant's Causeway on the coast of Ireland and the Wairere Boulders of New Zealand are known to have occurred on land but seldom, if ever, are found at sea.
Posted by Gregory LeFever at 1:07 PM