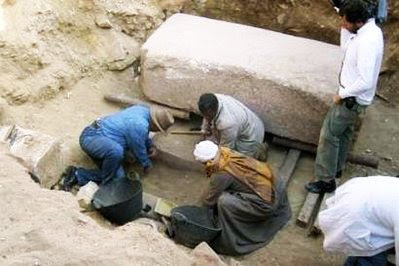 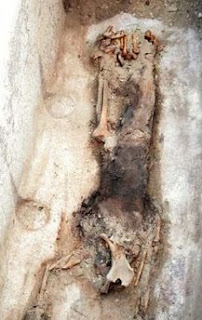 Archaeologists, above, unearth the sarcophagus and mummy, whose remains are shown at left.


Egyptian archaeologists have found the mummy of Queen Seshestet, mother of a pharaoh who ruled Egypt in the 24th century BC, the government said on Thursday.

After five hours spent lifting the lid of a sarcophagus, they found a skull, legs, pelvis, other body parts wrapped in linen, and ancient pottery, the government's antiquities department said. They also found gold wrappings which would have been put on the fingers of the mummified person.

Grave robbers ransacked the burial chamber in ancient times and stole the other objects. "Although they did not find the name of the queen buried in the pyramid, all the signs indicate that she is Seshestet, the mother of King Teti, the first king of the Sixth Dynasty," chief archaeologist Zahi Hawass said in a statement. Teti ruled Egypt for at least 10 years around the year 2300 BC and is buried nearby.

Click here for the Reuters article.
Posted by Gregory LeFever at 11:52 AM