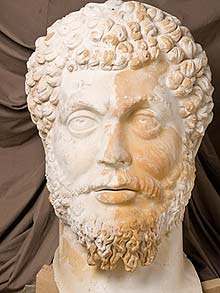 Archaeologists working in the ancient Roman baths in Sagalassos, Turkey, this week unearthed a 15-foot statue of Marcus Aurelius. Two other large statues – one of the Roman emperor Hadrian and one of Faustina the Elder, wife of the emperor Pius – also have been found recently in the ruins of the Roman bath there.

Sagalassos is located high in the Toros mountains in southern Turkey. An earthquake destroyed it between 540 and 620 AD, knocking down the baths and filling the site with rubble. Archaeologists now believe the baths had several large statues running along the walls, indicating potentially more will be found.

So far, they’ve recovered the head, right arm and lower legs of the Marcus Aurelius statue. The head is three feet tall and features contemplative eyes and a ruffled beard. Marcus Aurelius ruled the Roman Empire from 161 to 180 AD and was a respected Stoic philosopher noted his wise governance.
Click here for London Telegraph article.

Posted by Gregory LeFever at 11:05 AM