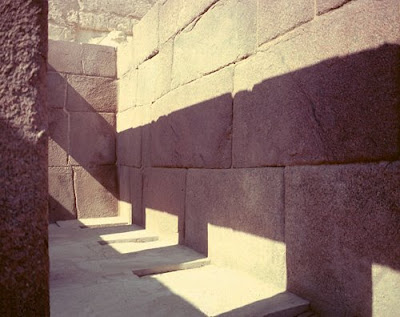 At more than 200 tons each, one wonders how these stones were cut with such precision and lifted into place over 4500 years ago when we cannot duplicate those feats today.
The Valley Temple of Khafre, located on the Giza plateau not far from the pyramids and the Sphinx, features a core structure constructed entirely of enormous limestone blocks. They tend to be of two sizes: either 30 feet by 12 feet by 10 feet, or 18 feet by 10 feet by 8 feet. Any of these – and there are hundreds of them – weighs more than 200 tons.

Why, for example, insist on using these cumbersome 200-ton monoliths when you could simple slice each of them up into 10 or 20 or 40 or 80 smaller and more maneuverable blocks? Why make things so difficult for yourself when you could achieve much the same visual effect with much less effort?

And how had the builders of the Valley Temple lifted these colossal megaliths to highest of more than 40 feet?

At present there are only two land-based cranes in the world that could lift weights of this magnitude. At the very frontiers of construction technology, these are both vase, industrialized machines, with booms reaching more than 220 feet into the air, which require on-board counterweights of 160 tones to prevent them from tipping over. …

In other words, modern builders with all the advantage of high-tech engineering at their disposal, can barely hoist weights of 200 tons. Was it not, therefore, somewhat surprising that the builders at Giza had hoisted such weights on an almost routine basis?

Plus, the stones are cut with multi-angled notches so they can fit together with jigsaw-puzzle perfection.

Egyptologists tend to put the age of this Valley Temple at about 2500 BC, but some researchers consider it much older.

Quoted section from Hancock's Fingerprints of the Gods.
Posted by Gregory LeFever at 10:16 AM

"At more than 200 tons each, one wonders how these stones were cut with such precision and lifted into place over 4500 years ago when we cannot duplicate those feats today." ..........

easy peazy, they had advanced technology back in those days,but science of today along with mainstream history scholars, keep looking the other way with a headstrong 'we believe in evolution and back then they only had sticks and stones'......just keep the eyes closed of the masses so the establishment stays in power...... brrr!!

"Egyptologists tend to put the age of this Valley Temple at about 2500 BC, but some researchers consider it much older." .... try 10.000 years with advanced technology from which we are still a thousand years away.