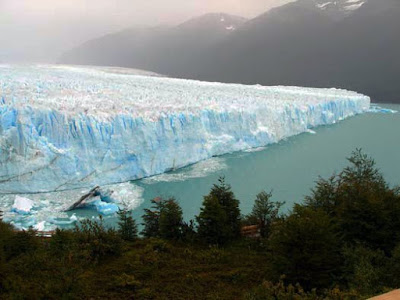 Ice Age glaciers expanded over Europe as the climate rapidly cooled.
Scientists have found new evidence of an abrupt climate change about 12,700 years ago in Western Europe. Extreme cooling within a short number of years was determined from sediments of a volcanic lake in the Eifel region of Germany.

In explaining their findings, researchers from Germany, Switzerland and Germany said they used a combination of microscopic research studies and modern geochemical scanner procedures to reconstruct climatic conditions even to the level of individual seasons. According to an article in Science Daily, “In particular, the changes in the wind force and direction during the winter half-year caused the climate to topple over into a completely different mode within one year after a short instable phase of a few decades.”

While admitting that the findings are puzzling, the researchers apparently made no mention of the possibility of a global cataclysm being responsible for the abrupt changes. There is considerable speculation among some scientists and researchers that a catastrophic event such as a comet, asteroid, or supernova remnants could have collided with the earth and endangered life on the planet. Such an event would have precipitated massive geophysical upheaval, including thousands of volcanic eruptions, filling the atmosphere with ash and leading to plunging temperatures for decades.

An abrupt shift of winds blowing across rapidly spreading ice is the dominant theory being put forth regarding these latest findings.
Click here for the article in Science Daily.

Posted by Gregory LeFever at 8:34 AM