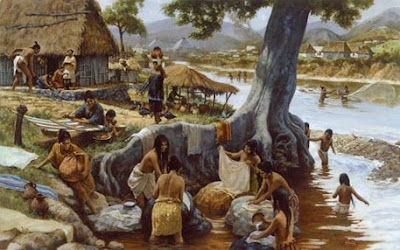 Fabrics found in the tomb of an unknown Mayan queen who lived around 400 AD rival today’s fabrics in quality and complexity. The tomb was discovered nearly four years ago, and analysis of the fabric fragments has continued since then. 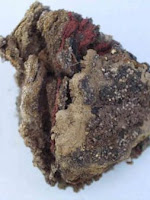 Some of the fabrics have thread counts of over 80 weft yarns per inch. “This is in the range of clothing that we wear,” said textile expert Margaret Ordonez of the University of Rhode Island, who has studied the cloth fragments. “This is a higher thread count than your jeans.”

“What’s surprising is that the fragments still exist,” she said. “We’re talking about a humid climate, and to have fragments of fabric exist in a tomb for that long is just amazing.”

The fabrics are made of cotton, grasses, leaves and tree bark. Some have retained hints of their hues, including a bright red made from cinnabar and a deep black, possibly created using iron. Some of the fragments have 25 layers of fabric stacked on top of each other. 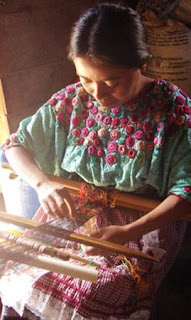 It’s unknown how the Maya wove the fabrics, but Ordonez suspects it was with a backstrap loom, a device with one end tied to a tree and the other around the weaver’s waist, so that tension is created and released when the weaver leans forward and backward.

“We finally get to look at the very fabrics themselves rather than just the images of them in art,” said William Saturno, a Maya expert at Boston University. He said the fabric’s sophistication is consistent with attire worn by figures in Mayan paintings.
(Painting at top is depiction of Mayan women weaving and washing textiles, in middle is a fragment of fabric from the tomb, and at right is a woman using a backstrap loom.)

Posted by Gregory LeFever at 12:08 PM