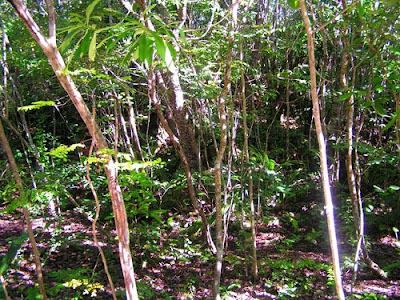 Thick vegetation covers the ground over the ruins of the large Mayan city.

Mexican archaeologists have begun recovery of a great Mayan city buried under tons of earth and jungle in the area of Ichkabal on the Yucatan peninsula, according to the National Anthropology and History Institute (INAH).

Previous archaeological digs in Ichkabal have indicated existence of a vast Mayan settlement of buildings, the biggest roughly 650 feet wide at the base and 150 feet high. The buildings are believed to be part of a city covering about 11.5 square miles whose study will add important archaeological information to what is known about ancient Mayan civilization.

“This is a city whose construction began in preclassic times, 250 years before Christ,” INAH said. No architectural details are visible on the surface. All that can be seen are mounds covered by “the exuberant vegetation” of the area.

The site was discovered in 1995 by a local inhabitant, who revealed the existence of pre-Colombian vestiges to two Mexican archaeologists.

Posted by Gregory LeFever at 3:04 PM