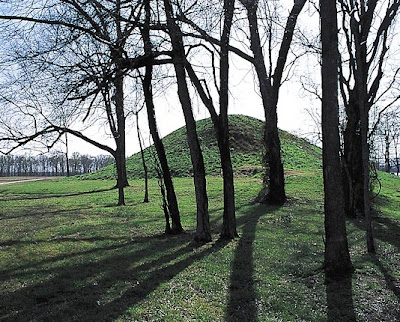 One of the mounds in Arkansas built by unknown Native Americans.
A group of earthen mounds previously believed to have been built by members of the Toltec culture of Mexico are now attributed to unknown Native Americans. The mounts are located about 35 miles from Stuttgart, Arkansas, and comprise one of the largest archaeological sites in the Mississippi River Valley.

"People started living at this place we call Toltec Mounds some time before 700 A.D.," Robin Gabe, park interpreter at Toltec Mounds Archeological Park, says. "Distinctive aspects of the culture of the people who lived here are the arrangement and construction of the mounds, the style of decoration on the pottery and the kinds of stone tolls."

Gabe said in the 1800’s historians and anthropologists thought the mounds had been built by the Toltec Indian tribes of Mexico, who were mound builders, but that was later proved to not be the case.

"The distinctive culture of Toltec Mounds is given the name of Plum Bayou, which is the name of a local stream," Gabe said. "We do not know what the Indians who built the mounds called themselves because they left no writing."

The people seem to have abandoned Toltec and this area sometime around 1050 A.D. It is unknown where these people went, nor do historians know who their descendants were. “We do know that these people were impressive builders and that they planned the construction of this center," Gabe said.

Posted by Gregory LeFever at 8:55 PM