Clay Figures May Be Servants, Not Soldiers 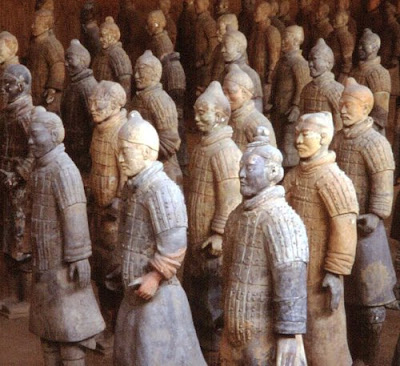 A small portion of the terracotta figures, either soldiers or servants.

A Chinese professor says the famed terracotta soldiers of Xi'an aren't soldiers at all ~ they're royal servants and bodyguards, most likely modeled after high-ranking Qin dynasty officials.

Most historians believe the 2,200-year-old clay statues buried near the emperor's tomb represent an army to guard him in the afterlife. But Liu Jiusheng of Shaanxi Normal University argues ordinary soldiers weren't allowed to get close to the emperor, even in death.

Furthermore, Liu says the figures stand at around six feet, much taller than average Chinese past or present. Liu theorizes the clay statues were probably made taller to show their elevated social status. Though not widely accepted, experts say Liu's argument is worth studying.

The 1,000-strong terracotta army was discovered near Xi'an in 1974 and was listed as a world heritage site by UNESCO in December 1987.
Posted by Gregory LeFever at 6:31 PM