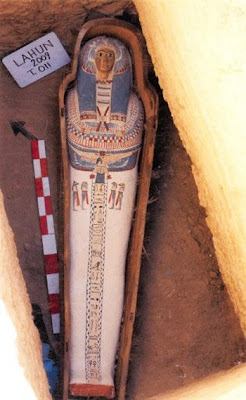 One of the brightly colored mummies found near the Ilahun pyramid.

Archaeologists in an Egyptian oasis have found dozens of brightly painted mummies dating back as far as 4,000 years.

"The mission found dozens of mummies in 53 rock-hewn tombs dating to the Middle Kingdom" from 2061-1786 BC, according to Zahi Hawass announced Sunday. "Four of the mummies date back to the 22nd Dynasty (931 to 725 BC) and are considered some of the most beautiful mummies found."

The linen-wrapped mummies are painted in the still-bright traditional ancient Egyptian colors of turquoise, terracotta and gold.

The necropolis was uncovered near the Ilahun pyramid in Fayoum oasis south of Cairo. The team also found 15 painted masks, along with amulets and clay pots, Hawass said.

Posted by Gregory LeFever at 6:19 PM