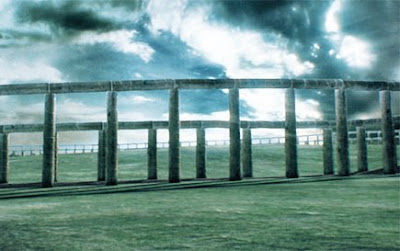 Artist's conception of the Stonehenge-like sacred monument in Ireland.

Archaeologists in Ireland have unearthed a mammoth wooden version of Stonehenge. It appears to have been a major structure at the ancient seat of the Irish high kings in the Hill of Tara in County Meath.

Archaeologist Joe Fenwick said a laser beam had been used to scan the ground surface to create a three-dimensional map of the site, revealing more than 30 monuments around Tara. Using another technique ~ described as taking an X-ray through the hillside ~ archaeologists discovered a ditch stretching six meters wide and three meters deep in the bedrock. The ditch, circling the Mound of the Hostages passage tomb, separated the outside world from the ceremonial center of Tara.

“The Hill of Tara had enormous ritual significance over the course of 5,000 to 6,000 years, so it's not surprising that you get monuments of the scale of the ditch pit circle," Fenwick says.

Posted by Gregory LeFever at 9:43 AM