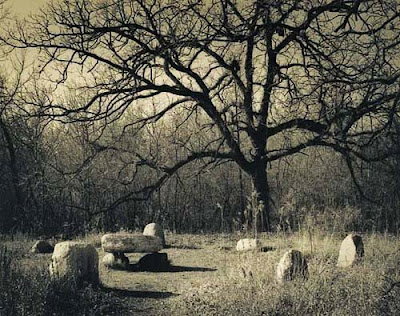 Ancient Romans considered Britain’s Celts ~ and their priests, whom he named Druids ~ to be a particularly savage people, and new findings seem to be bearing out that observation. Indications now point to cannibalism and ritual human sacrifice on a potentially massive scale.

After a first century BC visit to Britain, the Romans came back with horrific stories about the Celts, who had spread throughout much of Europe over a roughly 2,000-year period. Julius Caesar ~ leading the first Roman landing in 55 BC. ~ said the native Celts "believe that the gods delight in the slaughter of prisoners and criminals, and when the supply of captives runs short, they sacrifice even the innocent." 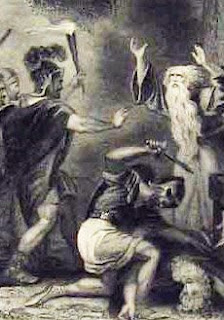 National Geographic reports that recent gruesome finds may confirm the Romans' accounts.
Incriminating evidence includes the 2,000-year-old, bog-mummified body of Lindow Man, discovered in England in the 1980s. At least one thing appears nearly certain about the man: He was the victim of a carefully staged sacrifice.

Other grisly clues come from a cave in Alveston, England. Skeletons belonging to as many as 150 people and dating back to about the time of the Roman conquest were discovered in 2000.

Depiction above is of Roman slaughter of Druids, which may have led to Celtic savagry.

Posted by Gregory LeFever at 7:06 PM

I do believe the original "Romans" would have been of Celtic stock, too.

And, unless I am mistaken, the Druids were of the "Beaker" people that predated the Celtic invasion of the British isles.

It's difficult to comment on this because of the confusion over who and what the Druids actually were ~ even the etymology of 'Druid' is fraught with conflicting data.

It seems your contention about Druids being part of the Bell-Beaker people is entirely possible. If we accept that "druid" is essentially a label for the high-priest caste of an ancient culture, then certainly the Beakers had their priests, i.e., their Druids, as you say.

The Lindow Man bog body is equally evidence of murder or execution. Furthermore, a dozen or so bodies strewn about the entire landscape of Northern and Insular Europe hardly constitute evidence of widespread human sacrifice. The charge of savagery coming from Roman sources is amusing considering the wholesale slaughter practiced in the arenas of the Empire, which included unbelievably cruel practices against 'criminals'.