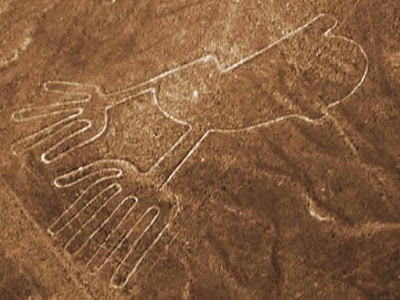 Peru’s National Institute of Culture is preparing to protect from heavy rains the enigmatic Nazca Lines, located in the country’s southern region, according to the resident archaeologist in Nazca, Mario Olaechea.

"It's a project that will serve the whole area in general, including drainage services, to avoid events such as the one in January when rainwater accumulated and drained, covering with a clay layer of the geoglyph called La Mano", Olaechea said. "The figure has not been erased. It is still intact, only one percent was covered by the clay layer.”

In the first months of the year, heavy rains also affected the southern plains of Nazca, but without serious consequences.
Posted by Gregory LeFever at 2:51 PM