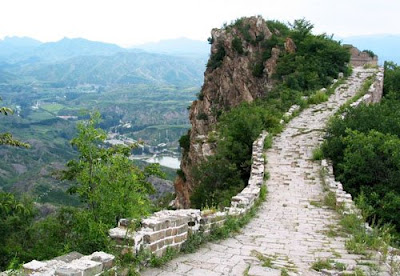 A section of the Great Wall in disrepair.
China’s famed Great Wall has gained another 180 miles due to infrared range finders and GPS devices enabling researchers to find portions previously concealed by hills, trenches and rivers.

The newly mapped parts of the wall were built during the Ming dynasty (1368-1644) to protect China against northern invaders and were submerged over time by sandstorms that moved across the arid region, according to China’s national mapping agency.

The additional parts mean the Great Wall ~ construction of which began more than 2,000 years ago to prevent incursions into China by the Mongols and others ~ spans about 3,900 miles through the northern part of the country.

Recent studies by Chinese archaeologists have shown that sandstorms are reducing sections of the wall in Gansu to "mounds of dirt" and that they may disappear entirely in 20 years. These studies mainly blame the erosion on destructive farming methods used in the 1950s that turned large areas of northern China into desert. In addition, portions of the wall in Gansu were made of packed earth, which is less resilient than the brick and stone used elsewhere in much of the wall's construction.

China in recent years has begun restoring parts of the wall as well as trying to curb commercial development on or next to the ancient structure.

Click here for the Guardian UK article.
Posted by Gregory LeFever at 9:30 AM

Could Great Wall have been built to protect against flood? Any evidence?