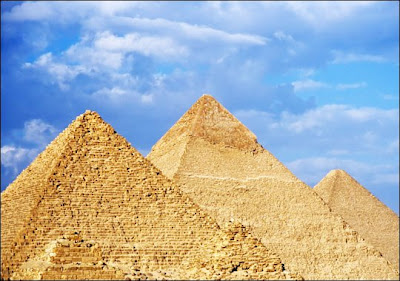 A number of Egypt's most magnificent pyramids follow a pattern of invisible diagonal lines, an Italian study has concluded. According to Giulio Magli, professor of archaeoastronomy at Milan's Polytechnic University, these invisible lines would connect most of the funerary complexes raised by the kings of the Old Kingdom between 2630 and 2323 BC.

"Following these diagonals, it appears clear that the arrangement of the monuments was carefully chosen in order to satisfy a number of criteria, which include dynastic lineage, religion and astronomical alignments," Magli tells Discovery News.

The study examined the chronology and geographical location of all the pyramids of the Fourth and Fifth Dynasties, from the Step Pyramid of Djoser (2630-2611 B.C.) to the now-collapsed pyramid of Unas (2356-2323 B.C.), both in Saqqara.

"Our starting point was the so-called 'Giza diagonal,' an ideal line which connects the southeast corners of the three main pyramids and points to Heliopolis. This was an important religious center sacred to the sun god," Magli said.

"Under this model, the funerary monuments of the pharaohs stand one after another, marking the dynastic link with the preceding pharaoh," Magli said. "They are linked by a diagonal which points to Heliopolis."

Attaching new pyramids to the "Giza diagonal" became increasingly difficult as the line extended far into the desert. While the pyramids of Khufu, the second pharaoh of the Fourth Dynasty, and his son Khafre were easily aligned along the diagonal, the pyramid of Menkaure, Khufu's grandson, had to be built well into the desert to sit on the line of sight toward Heliopolis.

Posted by Gregory LeFever at 12:18 PM