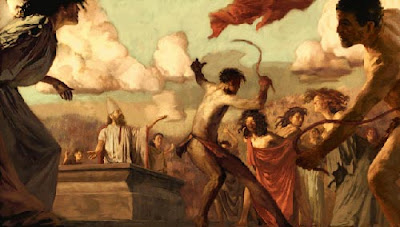 Depiction of Lupercalian festivities.
The ancient origins of St. Valentine’s Day are obscure. Historians see the celebration of the day stretching back to early Rome, with several embellishments ~ especially commercials ones ~ occurring in the succeeding centuries.
According to NRP:

From February 13 to 15, the Romans celebrated the feast of Lupercalia. The men sacrificed a goat and a dog, then whipped women with the hides of the animals they had just slain.

The Roman romantics "were drunk. They were naked," says Noel Lenski, a historian at the University of Colorado at Boulder. Young women would actually line up for the men to hit them, Lenski says. They believed this would make them fertile.

The brutal fete included a matchmaking lottery, in which young men drew the names of women from a jar. The couple would then be, um, coupled up for the duration of the festival – or longer, if the match was right.

The ancient Romans may also be responsible for the name. Emperor Claudius II executed two men named Valentine on February 14 of different years in the 3rd century AD. Their martyrdom was honored by the Catholic Church with the celebration of St. Valentine's Day.
Click here for the complete article.
Posted by Gregory LeFever at 1:37 PM

how history with a Valentine's Day?
is it true to what has been circulating that because
Valentine let the children teen doing a forbidden relationship in those days?

It’s no secret that most men only want one thing, right?

Well it turns out that’s not only wrong, but may actually be the root of many failed relationships.

In fact, the one thing men are universally obsessed with...

Is actually a feeling he’s been chasing his whole life.

It’s an elusive combination of emotion and biological drive that’s rarely satisfied in life or love.

And when you know how to satisfy this life long obsession...

He will make it his life long mission to cherish and please you...

And he will pursue your love to the ends of the earth.

Here’s a video you won’t want to miss that shows you how to become your man’s deepest obsession: