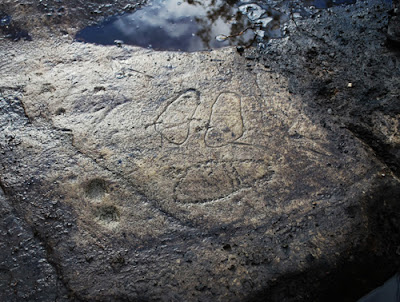 
During a recent, routine excavation of a Norwegian burial mound, archaeologists unexpectedly unearthed a group of Bronze Age petroglyphs. "We believe these are very special in a Norwegian context," says project manager Anne Haug of the Norwegian University of Science and Technology.
First found were the remains of two cremations, a burnt layer that contained fragments of bone. Underneath, archaeologists found petroglyphs, including eight drawings showing the soles of feet, with cross hatching and five shallow depressions. Two boat drawings and several other drawings of feet soles with toes were also found just south of the burial mound.

“This is a special discovery, and we are not aware of similar findings from Trøndelag County,” Haug says. “The tomb might have been deliberately constructed over the petroglyphs as part of funeral ritual.  Based on the type of petroglyphs and especially the drawings of the foot soles, we have dated the artwork to the Bronze Age, about 1800 to 500 BCE.”

“Why there are foot sole drawings beneath the tomb is a puzzle. But if we interpret the find in terms of a fertility cult, it may be that the soles represent God and life-giving power. That means that you can have both life and death represented in one place,” she says.

Haug says that there was a similar discovery in Østlandet, an area called Jong in Bærum, where petroglyphs illustrating foot soles were found under a tomb that dated back to the Bronze Age.
Click here for the article.
Posted by Gregory LeFever at 6:24 PM