Did Vikings Navigate with Polarized Sunlight? 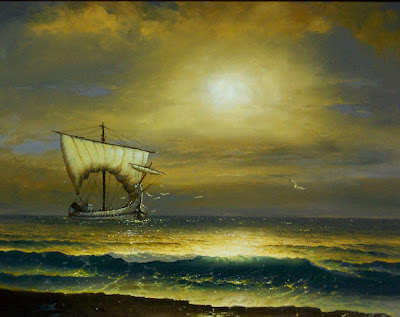 Viking navigators may have employed a sølarsteinn, or “sunstone,” capable of tracking polarized light to help them establish sailing directions even when the sun was hidden from view.
Early mention of such a practice is in the Icelandic sage of Sigurd and is now being researched to determine if polarized light did play a role in the wide-ranging journeys of Viking explorers. According to Nature News:

The saga describes how, during cloudy, snowy weather, King Olaf consulted Sigurd on the location of the Sun. To check Sigurd's answer, Olaf “grabbed a sunstone, looked at the sky and saw from where the light came, from which he guessed the position of the invisible Sun.” In 1967, Thorkild Ramskou, a Danish archaeologist, suggested that this stone could have been a polarizing crystal such as Icelandic spar, a transparent form of calcite, which is common in Scandinavia.

Scattering by air molecules in the atmosphere causes sunlight to become polarized, with the line of polarization tangential to circles centered on the Sun. So Ramskou argued that by holding a crystal such as calcite up to the sky and rotating it to check the direction of polarization of the light passing through it, the Vikings could have deduced the position of the Sun, even when it was hidden behind clouds or fog, or was just beneath the horizon.

Researchers now are updating studies done in 2005 on the potential use of a sunstone and polarized light.
Click here for the article.
Posted by Gregory LeFever at 2:59 PM