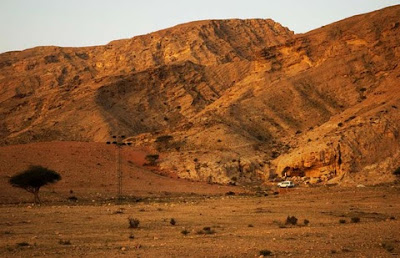 Jebel Faya, where the stone tools were found.
Ancient stone tools unearthed from a once-fertile area near the Persian Gulf indicate early humans migrated from Africa much earlier than previously thought. The artifacts from Jebel Faya and dated to 120,000 years ago, were created with several techniques, including “bifacial reduction” ~ removing material from two rock faces ~ that was abundant in Africa, but has never before been found in the Arabian Peninsula.
“When I looked at this material, none of it looked Near Eastern,” said Anthony Marks, an archaeologist with Southern Methodist University who analyzed the tools. “The more I looked at the material, the more it became clear that it had a connection with the kind of tools of East Africa.”
According to PBS:

Tools like this were believed to be used to kill and butcher animals, scrape fat from hides, make clothes from animal skin and create other, possibly wooden, tools. Scientists dated the artifacts with a technique called optically stimulated luminescence data.

“In essence, this is a technique which allows us to determine the time which has elapsed since sand grains were last exposed to sunlight,” said Simon Armitage, a professor of geography with Royal Holloway, University of London, and co-author on the study.

Additional evidence supports the theory that these tools belonged to a group of people that migrated from Africa to Arabia, scientists say. The standard model, which relies on data from mitochondrial DNA, says the first humans left Africa about 60,000 years ago, traveled to Arabia and eventually, about 50,000 years ago, arrived in Australia.

Marks says he’s skeptical that the migration occurred so quickly. “The earlier movement out of Africa makes a lot more sense to me.” Plus, 120,000 years ago, the now-aird area had been transformed by monsoon rains into lush grasslands with lakes and acacia trees. Briefly, sea levels were low and the Red Sea was relatively easy to cross.
Click here for the PBS article.
Click here for the BBC article.
Posted by Gregory LeFever at 3:15 PM