Irish Monks in Iceland Even Before Vikings? 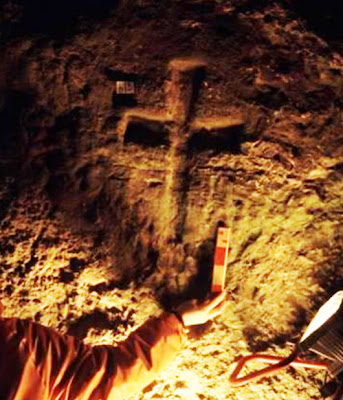 Cross carved inside Icelandic cave similar to Scottish ones.
New archaeological discoveries show that Iceland was inhabited around 800 AD, nearly 70 years before the usual dating of its Viking settlement. Researchers believe these early inhabitants may have come from Irish monastic communities found throughout the Scottish islands at that time and described in Viking-Age and medieval texts.
“Questions surrounding Iceland’s first settlement in the early medieval period have been of longstanding interest for scholars,” says Professor Kristjan Ahronson of Prifysgol Bangor University in Wales. He led the team that made the discoveries.
As an example of the longstanding interest in this topic, Ahronson pointed to the University of Toronto’s Sir Daniel Wilson, who argued in 1851 that “when Norseman first visited Iceland in the latter half of the 9th century, it was uninhabited, but they discovered traces of the former presence of Irish monks.”
One discovery was made at Kverkarhellir cave, on the land of Seljaland farm in southern Iceland. Nearly 200 of these artificial caves have been found on the island. “Tool marks on the cave walls vividly illustrate the artificial nature of these sites,” said Professor Ahronson.
Click here for the complete article.
Posted by Gregory LeFever at 6:12 PM

could anyone tell me, where i can find data about this matter. I'm working on a story about this and i am hugely interested in any source i could find. I'm foremost interested in a possible reason why these monks would went there!
Thanks,
Ingmar

They were likely seeking a "desert experience," following through on the examples of the Christian desert fathers whose spirituality they wished to emulate. See also Brendan the Navigator.

thank you desmond. i'm wondering why they went so far, how they get there (monks as sailors??) and how they possible knew land was there anyway. seems to be a lot of dangers and complications, if you can have your solitude in places at your own island. my search continues:-)

Gaelic Monks were of both Irish and Scottish origin. I wonder if they were trying to flee Viking raids in Scotland. The following is from Wikipedia: "From 793 onwards repeated raids by Vikings on the British Isles are recorded. 'All the islands of Britain' were devastated in 794 with Iona being sacked in 802 and 806." There's some great info on the net on the Island of Iona and it's religious significance.

Tanks for your comment. It makes sense what you say, certainly. But it leaves some questions. for examle; how did these monks know how to sail a boat? how did they know where to go? There is a story about bird migrations but i find that a bit unlogical. You must be very desperate to go on the ice-cold sea, with no professional sailingskills and basically not really knowing where to go.... and you are quit lucky to find actually land.

So, as to getting the whole picture, im still wondering how they did it:-)