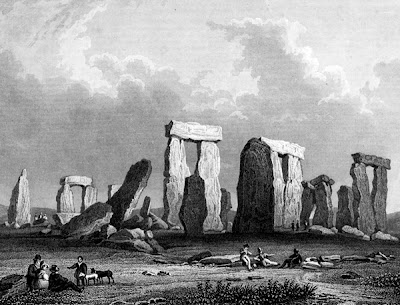 
Scientists believe they have located the origin of a number of the famous bluestone monoliths forming the inner circle and horseshoe configurations at Stonehenge.
According to Culture 24:

One type of bluestone, the so-called spotted dolerite, was convincingly traced to the Mynydd Preseli area of North Pembrokeshire in the 1920s, but the origins of many of the others have remained a mystery. Now geologists at the museum in Cardiff believe they have identified the source of one of the rhyolite types.

A team led by Keeper of Geology Dr Richard Bevins has been using “standard petrographical techniques” and “laser ablation induction coupled mass spectrometry” on samples from Stonehenge and Pembrokeshire.

Their findings, which involve the application of zircon chemistry as a new tool for “provenancing rhyolitic lithics,” point to a source for the stones in an area north of the Mynydd Preseli range, in the vicinity of Pont Saeson.

The results may also provide some new clues about how and why the stones were transported to the Stonehenge area.
“It has been argued that humans transported the spotted dolerites from the high ground of Mynydd Preseli down to the coast at Milford Haven and then rafted them up the Bristol Channel and up the River Avon to the Stonehenge area,” explained Dr Bevins. “However, the outcome of our research questions that route, as it is unlikely that they would have transported the Pont Saeson stones up slope and over Mynydd Preseli to Milford Haven.”
Click here for the article.
Posted by Gregory LeFever at 8:20 PM

It is interesting how archaeology keeps on moving from one hypothesis to another yet persistently unable to go deep into the core of megalithism. The reason is obvious, their theories cannot go beyond physical evidences, ans since these are so limited, so do are their theories.