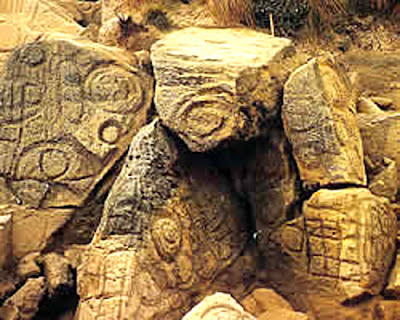 Tasmanian petroglyphs.
Australian archaeologists have uncovered what they believe to be the world's southernmost site of early human life, a 40,000-year-old tribal meeting ground.
The site appears to have been the last place of refuge for Aboriginal tribes from the cannon fire of Australia's first white settlers, said Michael Mansell of the Tasmanian Aboriginal Centre. The find came during an archaeological survey ahead of roadwork near Tasmania's Derwent River and soil dating had established the age of the artifacts found there.
"When the archaeological report came out it showed that (life there) had gone back longer than any other recorded place anywhere else in Tasmania, dating back to 40,000 years," Mansell told AFP.
Up to three million artifacts, including stone tools, shellfish fragments and food scraps, were believed to be buried in the area, which appeared to have been a meeting ground for three local tribes.
Click here for complete article.
Posted by Gregory LeFever at 11:57 AM