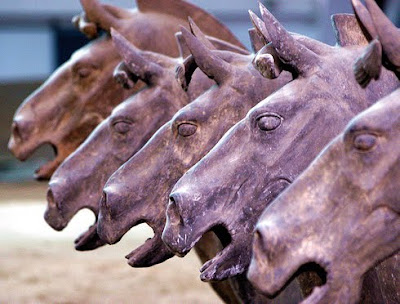 Some of the terra cotta horses found in the emperor's tomb.
Most of the horses in the terracotta army in a Chinese emperor's tomb had no testicles, pointing to the possibility of equine castration some 2000 years ago.

Yuan Jing, an archaeologist with the Chinese Academy of Social Sciences, studied the more than 600 terracotta horses within the tomb of Qinshihuang, the first emperor of the Qin Dynasty, who ruled from 221 BC to 207 BC. He noted that all the 520 horses that pulled chariots had penises but no testicles, some of the 116 cavalry horses were found to have them. Yuan said his findings gave some indication of how horses may have been handled by humans.

Researchers believe the terracotta army ~ which includes archers and infantrymen ~ was to help Qinshihuang rule in the afterlife.

Click here for the complete article.
Posted by Gregory LeFever at 8:12 PM