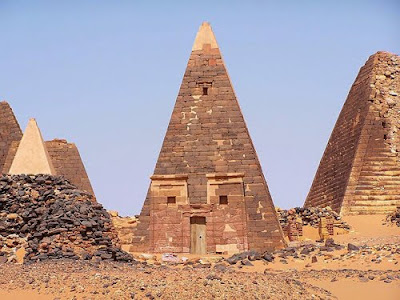 Some of the pyramid structures excavated in Meroe.
French, Swiss and British archaeologists say the Nubian Desert of northern Sudan holds mysteries to rival ancient Egypt.
"There is a magic beauty about these sites that is heightened by the privilege of being able to admire them alone, with the pyramids, the dunes and the sun," says Guillemette Andreu, head of antiquities at Paris' Louvre museum. "It really sets them apart from the Egyptian pyramids, whose beauty is slightly overshadowed by the tourist crowds."
Kush, also called Nubia, was an ancient kingdom centered on the confluence of the Blue Nile, the White Nile and the River Atbara and was one of the earliest civilizations in the Nile valley. The Nubians eventually gained their independence and, at the height of their power, they turned the table on Egypt and conquered it in the 8th century BC.  At the end of March, the Louvre will host its first exhibition on the Meroe dynasty, the last in a line of ‘black pharaohs’ that ruled Kush for more than 1,000 years until the kingdom's demise in 350 AD.
Meroe had three cemeteries containing more than 100 pyramids that are smaller than their Egyptian counterparts. The largest are 30 metres (98 feet) high and the angles are steep, some close to 70 degrees.

Although the pyramids have been thoroughly excavated, yielding a treasure trove of knowledge about Kushite culture, many aspects of Kushite civilisation remain shrouded in mystery for archaeologists.

Click here for the complete article.
Posted by Gregory LeFever at 12:18 PM