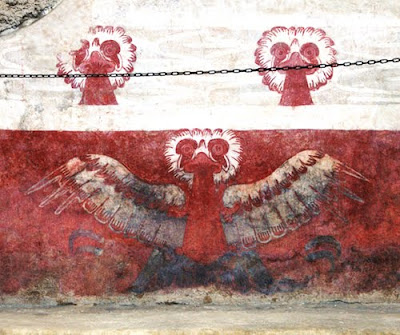 Portion of the Las Aquilas mural.
Several Prehispanic murals at Tetitla Palace, in the Teotihuacan Archaeological Zone, have been fully restored after two years of work by specialists from the National Institute of Anthropology and History.

Jaime Cama Villafranca of the National School of Conservation, Restoration and Museography (ENCRyM) directed the intervention.

Black pigment on the Las Aguilas mural ~ no longer visible to the naked eye ~ was recovered.
“The mural presented eagle’s heads painted in red, floating on a white space,” Villafranca said. “After analyzing it, we found rests of black lines that united the heads. We restored the black feathers described in archaeological reports of the 1940s decade.”

Click here for the complete article.
Posted by Gregory LeFever at 12:31 PM