Lost Language of the Picts is Discovered 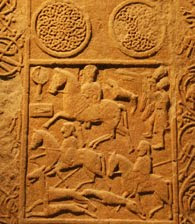 New research has determined that the ancestors of modern Scottish people left behind carved stones displaying the written language of the Picts, a society existing in Scotland from 300 to 843.

Highly stylized rock engravings on what are known as the Pictish Stones earlier were believed to be rock art. But a new study instead concludes the engravings represent the long lost language of the Picts.

Click here for the complete article.
Posted by Gregory LeFever at 8:38 PM