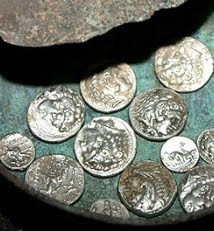 A collection of Hellenistic coins dating back to the era of Alexander the Great were found recently near Najm Castle in northern Syria .

A local man found the coins as he was preparing his land for construction, uncovering a bronze box that contained around 250 coins. Yousef Kanjo, director of archaeological excavations at Aleppo Department of Archaeology and Museum said the box contained two groups of silver Hellenistic coins: 137 tetra drachma (four drachmas) coins and 115 drachma coins.