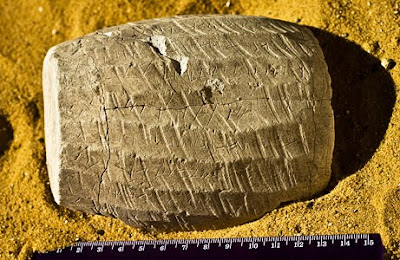 The stone mug with its inexplicable carvings.
Ten lines of script carved into a 2,000-year-old stone mug found on Mount Zion are mystifying archaeologists, who believe the inscription may provide details about ancient Jewish life.
"These were common stone mugs that appear in all Jewish households" of the time, lead excavator Shimon Gibson of the University of North Carolina told National Geographic. "But this is the first time an inscription has been found on a stone vessel."

According to National Geographic:

Working on historic Mount Zion ~ site of King David's tomb and the Last Supper ~ the archaeologists found the cup near a ritual pool this summer. The dig site is in what had been an elite residential area near the palace of King Herod the Great, who ruled Israel shortly before the birth of Jesus.
From the objects that surrounded it, Gibson determined that the cup dated from some time between 37 B.C. and A.D. 70, when the Romans nearly destroyed Jerusalem after a Jewish revolt.

Such stone mugs were popular among Jews at the time because of the culture's purity rules. According to tradition, a pottery cup that had been contaminated by contact with a forbidden food had to be broken and discarded, according to National Geographic.
Click here for the National Geographic article.
Posted by Gregory LeFever at 3:48 AM

"According to National Geographic:

Working on historic Mount Zion ~ site of King David's tomb and the Last Supper ~ the archaeologists found the cup near a ritual pool this summer. The dig site is in what had been an elite residential area near the palace of King Herod the Great, who ruled Israel shortly before the birth of Jesus."

Yeah yeah yeah, real "scientific" our National Geographic: like the myth of David, Jesus of the Last Supper has any basis in reality.