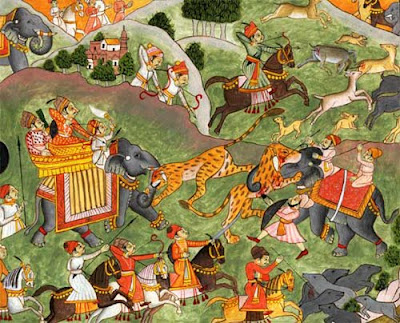 The longstanding belief of an ancient division between India’s Aryan and Dravidian populations ~ essentially a north-south separation ~ has been disproved by genetic researchers from Harvard and India.

"This paper rewrites history. There is no north-south divide,'' Lalji Singh, former director of the Centre for Cellular and Molecular Biology (CCMB) and a co-author of the study, said at a press conference in Hyderabad on Thursday.

According to the Times of India:

Senior CCMB scientist Kumarasamy Thangarajan said there was no truth to the Aryan-Dravidian theory as they came hundreds or thousands of years after the ancestral north and south Indians had settled in India.

The study analysed 500,000 genetic markers across the genomes of 132 individuals from 25 diverse groups from 13 states. All the individuals were from six-language families and traditionally "upper'' and "lower'' castes and tribal groups. "The genetics proves that castes grew directly out of tribe-like organizations during the formation of the Indian society,'' the study said. Thangarajan noted that it was impossible to distinguish between castes and tribes since their genetics proved they were not systematically different.

“. . .The initial settlement took place 65,000 years ago in the Andamans and in ancient south India around the same time, which led to population growth in this part,'' said Thangarajan. "At a later stage, 40,000 years ago, the ancient north Indians emerged which in turn led to rise in numbers here. But at some point of time, the ancient north and the ancient south mixed, giving birth to a different set of population. And that is the population which exists now and there is a genetic relationship between the population within India.''

The study reveals that the present-day Indian population is a mix of ancient north and south, bearing the genomic contributions from two distinct ancestral populations ~ the Ancestral North Indian (ANI) and the Ancestral South Indian (ASI).

Click here for the Times of India article.
Posted by Gregory LeFever at 10:52 AM