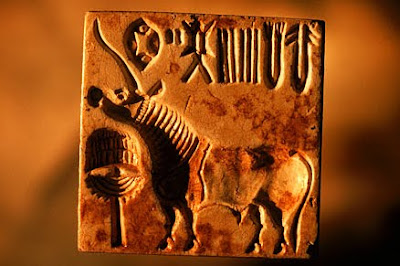 A Harappan seal circa 2400 B.C. from the Indus Valley.
The ancient Indus Valley civilization was in many ways highly sophisticated, but its language has proven so impenetrable that some scholars have speculated the entire society was illiterate. But new research on the Harappan script using computer technology seems to be proving otherwise.
The 4,500-year-old urban culture covered 300,000 square miles in modern day Pakistan and northwestern India. Digs at Mohenjo-daro and Harappa have revealed a sophisticated society. According to Time magazine:

But the Indus Valley civilization poses an intractable problem, one which a legion of archaeologists and scientists have puzzled over from the first excavations to a new study published last month. Its writing, etched in signs on tiny, intricate seals and tablets, remains undeciphered, shrouding the ancient culture in mystery. A code-busting artifact with bilingual text, like the Rosetta Stone, has yet to be found.
By some counts, over 100 decipherments of the civilization's often anthropomorphic runes and signs ~ known in the field as the Harappan script ~ have been attempted over the decades, none with great success.


Scientists using computer modeling and probability testing now have “determined the Harappan script had a similar measure of conditional entropy to other writing systems, including English, Sanskrit and Sumerian. If it mathematically looked and acted like writing, they concluded, then surely it is writing.”
Click here for the complete Time magazine article.
Posted by Gregory LeFever at 8:00 AM