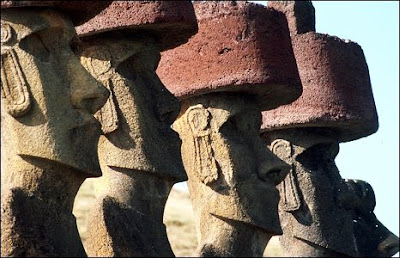 The mysterious volcanic hats atop the statues.
Researchers believe they’ve figured out how the remote Easter Islanders were able to place huge rock “hats” on their distinctive statues, but they still don’t know why.
The hats were carved from volcanic rock. "We know the hats were rolled along the road made from a cement of compressed red scoria dust," archaeologist Colin Richards tells the BBC. Each hat weighs several tons, but the reason for the hats remains unknown.
"These hats run all the way down the side of the volcano into the valley,” he says. "We can see they were carefully placed. The closer you get to the volcano, the greater the number.”
Easter Island lies 2,500 miles off the coast of Chile and is one of the world’s most remote places inhabited by people. "The Polynesians saw the landscape as a living thing, and after they carved the rock the spirits entered the statues," Richards adds.
The research team is from the University of Manchester and University College London, the first English archaeologists to work on Easter Island since 1914.
Click here for the BBC article.
Posted by Gregory LeFever at 9:43 PM

Interesting that they thought the spirit entered after the stone was carved. While on a tour of the Vatican this summer I learned that the Pagans believed the veins in marble made it a sacred and spiritual thing. As a result the artist would often wait for the stone to reveal what it wished to become. Early Christians were encouraged to decapitate or break the noses off of the statues as they believed it would destroy the blaspheming spirit-god within and take away its power.

That's interesting, Angela. The irony in the early Christian story is that in defacing the statues, they admitted to some power of the spirit, which in itself is a blasphemous belief, if I'm understanding the story. Oh well, that sort of spiritual intolerance is rampant throughout recorded history.

Thanks for stopping by and leaving the provocative comment.