Finding the Tomb of Herod the Great 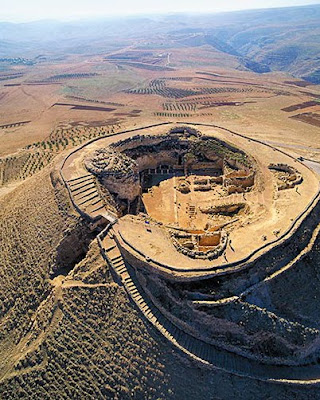 Ruins of Herod's elaborate palace fortress on Herodium.
A 75-year-old Israeli archaeologist ~ Ehud Netzer of Hebrew University ~ is certain he has solved one of biblical archaeology’s greatest mysteries: locating the tomb of King Herod the Great.
Known for his cruelty as well as architectural achievements, Herod ruled over Judea from 37 to 4 BC. Though the Gospel of Matthew charges him with the infamous “Massacre of the Innocents,” most modern biographers doubt the historical existence of the event.

Herodium is the mountain where Herod is said to have built his fortified palace and final resting place. Smithsonian.com says:

Long an object of scholarly as well as popular fascination, Herodium, also called Herodion, was first positively identified in 1838 by the American scholar Edward Robinson, who had a knack for locating biblical landmarks. After scaling the mountain and comparing his observations with those of the first century Jewish-Roman historian Flavius Josephus, Robinson concluded that "all these particulars...leave scarcely a doubt, that this was Herodium, where the [Judean] tyrant sought his last repose."

By the late 1800s, Herod's tomb had become one of biblical archaeology's most sought-after prizes. And for more than a century archaeologists scoured the site. Finally, in 2007, Ehud Netzer of Hebrew University announced that after 35 years of archaeological work he had found Herod's resting place. The news made headlines worldwide.

Netzer, one of Israel's best-known archaeologists, in 1976 led a team that discovered the site of one of Herod's infamous misdeeds: the murder of his brother-in-law, Aristobulus, whom Herod ordered to be drowned in a pool at his winter palace complex near Jericho. The discovery of Herod's tomb, however, is Netzer's most celebrated find. 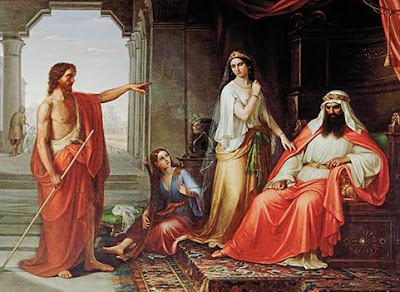 Herod on his throne, as depicted by Guiseppe Fattori in 1856.

Posted by Gregory LeFever at 3:15 AM

Great blog, this is real news.

Ha! They won't find MY tomb as easily as they seem to have found my father's. Even though HE might have been the one they called "the great" and I only "Antipas" but at least I've managed to come back to life two thousand years on! Take that dad!

"Though the Gospel of Matthew charges him with the infamous “Massacre of the Innocents,” most modern biographers doubt the historical existence of the event."

"Herodium is the mountain where Herod is said to have built his fortified palace and final resting place. Smithsonian.com says:

Long an object of scholarly as well as popular fascination, Herodium, also called Herodion, was first positively identified in 1838 by the American scholar Edward Robinson, who had a knack for locating biblical landmarks."

Yeah, what a "knack" this "scholar" had: take a book based on myth and stolen religion from the Egyptians and Sumerians and "discover" mythical locations described therein.

"Biblical Archaeology": the largest oxymoron in the universe.

There are more and more people that are in the need of Buy Viagra, many for serious and real erectile dysfunctions, others just for the placer of using Viagra, Generic Viagra. Now with the internet almost in every home it is more easy to get Viagra Online or Cheap Viagra or if you want you can purchase Viagra Online Without Prescription or Viagra Without Prescription, you just have to take the easiest way to obtain the product.