Early Stone Figures May Have Been Toys 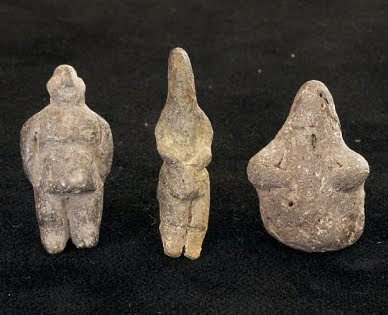 Three of the 2,000 figures unearthed so far in Catalhoyuk.
Stone Age statues carved from stone and clay 9,000 years ago could have been the world's first educational toys. About 2,000 of them have been unearthed at Catalhoyuk in Turkey ~ the world's oldest known town ~ some as recently as last week.

Made by Neolithic farmers, they depict tiny cattle, sheep and people. According to the London Daily Mail:

In the 1960s, some researchers claimed the more rotund figures were of a mysterious large breasted and big bellied "mother goddess,” prompting a feminist tourism industry that thrives today.

They say the "mother goddess" figures ~ which were buried among the rubbish of the Stone Age town ~ are unlikely to be have been religious icons. Many of the figures thought to have been women in the 1960s, are just as likely to be men.

Archaeologist Lynn Meskell of Stanford University said: "The majority are cattle or sheep and goats. They could be representatives of animals they were dealing with ~ and they could have been teaching aides.
"All were found in the trash - and they were not in niches or platforms or placed in burials."

Of the 2,000 figurines dug up at the site, less than five per cent are female, she told the British science Festival in Surrey University, Guildford. "These are things that were made and used on a daily basis. People carried them around and discarded them."

Catalhoyuk is one of the most important archaeological sites in the world. Established around 7,000 BC, it was home to 5,000 people living in mud brick and plaster houses.

Click here for the Daily Mail article.
Posted by Gregory LeFever at 11:10 AM

FINALLY! Something useful for my Social studies project. Every site just is about buying new toys when I needed toy facts from the Stone Ages. THANKYOU