Earliest 'Zero' Was Only a Placeholder 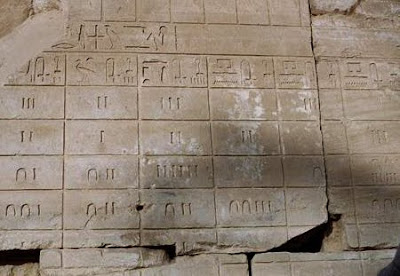 Wall of ancient Egyptian numerals at Karnak.
The mathematical concept of zero ~ or at least a “placeholder” zero in the form of two brackets ~ may date back 5,000 years to ancient Sumaria, when its purpose was to enable people to tell 1 from 10 or 100.

But zero actually began functioning as a numerical value in fifth century India, according to Robert Kaplan in his 2000 book The Nothing That Is: A Natural History of Zero. "It isn't until then, and not even fully then, that zero gets full citizenship in the republic of numbers," Kaplan tells Scientific American, adding that some cultures were slow to accept the idea of zero, which for many carried darkly magical connotations.

According to Scientific American, the second appearance of zero occurred independently in the New World, in Mayan culture, likely in the first few centuries A.D. "That, I suppose, is the most striking example of the zero being devised wholly from scratch," Kaplan says.

The number zero as we know it arrived in the West circa 1200, most famously delivered by Italian mathematician Fibonacci (aka Leonardo of Pisa), who brought it, along with the rest of the Arabic numerals, back from his travels to north Africa. But the history of zero, both as a concept and a number, stretches far deeper into history—so deep, in fact, that its provenance is difficult to nail down.