Early Depiction of Menorah is Discovered 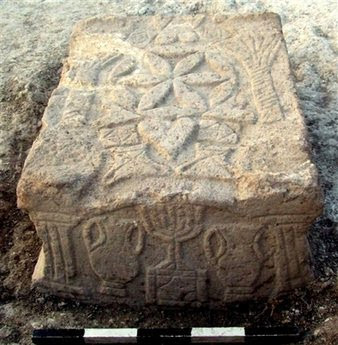 The seven-branched menorah is carved at the base of this stone.
Israeli archaeologists have uncovered one of the earliest depictions of a menorah ~ the seven-branched candelabra that has come to symbolize Judaism ~ in a 2,000-year-old synagogue recently discovered by the Sea of Galilee.
The synagogue dates to the period of the second Jewish temple in Jerusalem, where the actual menorah was kept. A small number of depictions of the menorah have surfaced from the same period, according to the Associated Press, but this one was unique because it was inside a synagogue and far from Jerusalem, illustrating the link between Jews around Jerusalem and in the Galilee to the north.

The temple in Jerusalem was destroyed by Roman legions in 70 A.D. Most other depictions of the menorah were made only after the temple's destruction, and if this finding is indeed earlier it could be closer to the original, said Aren Maeir, an archaeology professor at Bar-Ilan University in Israel.
"If you have a depiction of the menorah from the time of the temple, chances are it is more accurate and portrays the actual object than portrayals from after the destruction of the temple, when it was not existent," he said.

The menorah, depicted atop a pedestal with a triangular base, is carved on a stone which was placed in the synagogue's central hall.
Click here for the Associated Press article.
Posted by Gregory LeFever at 10:45 AM

"The synagogue dates to the period of the second Jewish temple in Jerusalem,"

bwahahahaha, like there was ever a "First temple" other than in the fertile minds of 7th century BC authors of the Old testament.

Where is the proof? HOW LONG have the Eastern European occupiers of Palestine searched in vain for ANY proof of a "David" or "Solomon" or "First Temple?" Or "Exodus", or any "Kingdom?" The "great city of Jericho": a small 12 acre (including the pens and stalls) backwater sheep-herder village. THAT'S proven.

And it will always be in vain: these were myths the Hyksos invaders of Egypt lifted and modified from Egyptian history.

Now trying desperately to install false history to cover their criminal genocide and label it "God's Will."