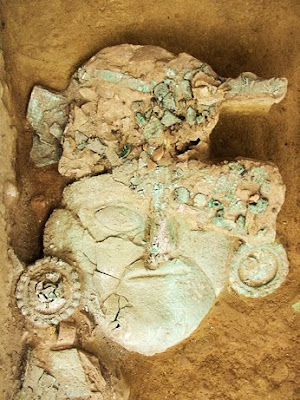 Gilded mask found beside the tomb of the elite male.
Archaeologists were surprised recently to unearth the remains of a male buried among a bevy of powerful priestesses in a Peruvian pre-Inca Moche tomb. The Moche people were a fragmented society of farmers who occupied the arid coasts of Peru from about 100 to 1000 AD.
According to National Geographic:

Surrounded by early "smoke machines" as well as human and llama bones, the body was among several buried inside a unique double-chambered tomb that dates back to A.D. 850, said archaeologist Luis Jaime Castillo Butters, of the Catholic University of Peru in Lima.

The tomb contained a wooden coffin decorated with a copper lattice and a gilded mask, sitting on a raised platform. Inside the coffin "is where we find the main object of the burial, and that fellow is a male," Castillo said.
"After 18 years of excavation in San José de Moro, we were expecting another female," he added. "But this tends to happen [in archaeology]—expect the unexpected."

The site has so far yielded seven royal priestess burials, an indication of the powerful role of women in Moche society, Castillo said.
Click here for the National Geographic article and more photos.
Posted by Gregory LeFever at 9:54 AM