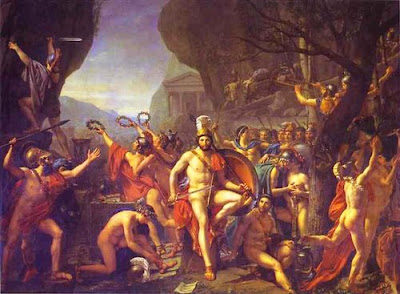 Leonidas at Thermopylae by Jacques David, 1814.

As depicted in ancient art, Greek men may have strolled around naked when at parties, but new research indicates scenes of them engaged in naked warfare are probably inaccurate.

"In ancient Greek art, there are many different kinds of nudity that can mean many different things," Jeffrey Hurwit, an historian of ancient art at the University of Oregon, tells LiveScience. "Sometimes they are contradictory."

Hurwit says Greeks did walk around naked in some situations. Men strode about free of their togas in the bedroom and at parties called symposia, where they would feast and carouse. Nudity was also common on the athletic fields and at the Olympic games.

However, nudity ~ Greek or otherwise ~ could be risky in the wrong situations.

"Greek males, it is generally agreed, did not walk around town naked, they did not ride their horses naked, and they certainly did not go into battle naked," Hurwit said. "In most public contexts, clothing was not optional, and in combat nakedness was suicidal."

Posted by Gregory LeFever at 1:12 PM