Sorry, Googlers, It's Not Atlantis 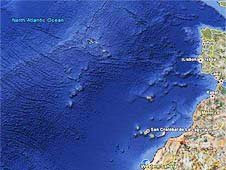 It was entirely predictable: Google Earth’s new capabilities enabling people at their home computers to scan contours of the oceans’ floors would lead directly to discovery of Atlantis.

Observers recently reported to Google’s offices what appeared to be a grid of streets and the outlines of a big city on the sea floor about 600 miles off the African coast. Experts had said this was one of the possible sites of the city described by Plato, the Greek philosopher.

But Google said the lines represented sonar data collected from boats. "It's true that many amazing discoveries have been made in Google Earth including a pristine forest in Mozambique that is home to previously unknown species and the remains of an ancient Roman villa," a Google statement said.

"In this case, however, what users are seeing is an artifact of the data collection process. Bathymetric (or sea floor terrain) data is often collected from boats using sonar to take measurements of the sea floor," the statement continued. "The lines reflect the path of the boat as it gathers the data. The fact there are blank spots between each of these lines is a sign of how little we really know about the world's oceans."

The story of Atlantis, a fabled utopia destroyed in ancient times, has captured the imagination of scholars ever since it was first described by the philosopher Plato more than 2,000 years ago.