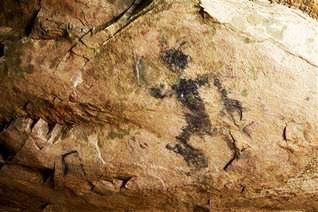 The drawing on the roof of the concealed rock shelter is about a foot long.

A drawing of a dancing stick figure recently discovered in a rock shelter in Tennessee's remote Cumberland Plateau dates likely from 1000 to 1600 AD.

“I knew that Native American rock art had been found in the area, but I didn't realize this was so significant," said Corey Holliday, a cave specialist who found the drawing. "My first impression was that someone had drawn it with charcoal."

In fact, the artist most likely lived during the Mississippian Period between A.D. 1000 and 1600 and used a paint based on a prehistoric recipe whose main ingredient was pulverized clay, according to Jan Simek, a University of Tennessee anthropology professor who specializes in cave archaeology.

Simek determined that the reason the pictograph looks so fresh is because it has been protected by a veneer of calcium carbonate leaching out of the sandstone.  "It is a remarkable figure," Simek said. "In my mind, there is no chance it is a recent fake."

Posted by Gregory LeFever at 8:17 AM