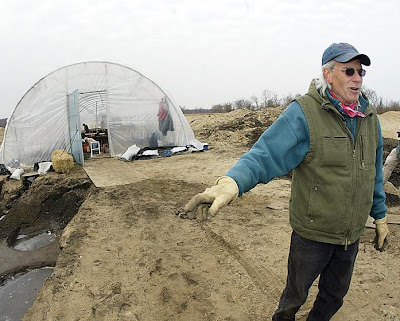 Archaeologist David Benn at the dig site.
Eight weeks of archaeological digging in southeastern Iowa has yielded 100,000 artifacts and is increasing knowledge about little-known hunter-gatherers who lived in the area about 1,700 years ago.

The area's ancient inhabitants are believed to be part of the Weaver culture located not far from the confluence of the Iowa and Cedar rivers near Oakville in Louisa County, where fish and game were plentiful, said Dave Benn, a research archaeologist.

The Native Americans lived in a doughnut-shaped village around a communal area and occupied 20 to 25 tree branch and bark wigwams capable of housing up to 10 people each.

“They ate a huge number of fish, and we also found turtle and deer bones,” Benn said of the diet of the people about whom little is known. “They lived well, they ate well, and there was a lot of food here. There were villages up and down the banks of rivers all through the area. This one is a particularly good find, probably the best I’ve seen in a decade.”

Many of the recovered artifacts are unrecognizable bone fragments and pottery shards, but there are also stone arrowheads and spear points, stone axe heads and pits laden with ancient trash that give a glimpse of how the village lived. “As archaeologists, we are very interested in trash,” Benn said. “We’re all about trash.”

Posted by Gregory LeFever at 11:13 AM

"little known", Iowa has always been a little bit behind and slow to learn. This is the 21st century, get with it.