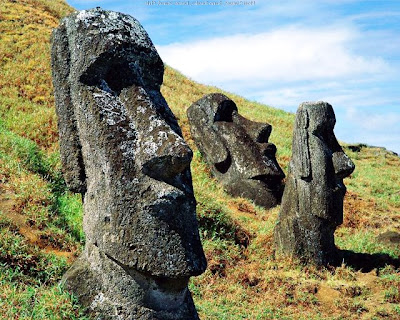 The ancient Rapa Nui people would still be here in traditional form if it weren’t for the diseases introduced by European settlers in the 1800s. “Societies don’t just go into a tailspin and self-destruct,” says archaeologists Chris Stevenson, an archaeologist at the Virginia Department of Historic Resources. “They can and do adapt, and they emerge in new ways.”

While evidence suggests the Rapa Nui people cut down 6 million trees in 300 years, for example, they were also developing new technological and agricultural practices along the way ~ such as fertilization techniques to restore the health of the soil and rock gardens to protect the plants. Other archaeological evidence indicates that the Rapa Nui radically changed their societal structure from one dominated by chiefs to one that was much more egalitarian in nature, too, which effectively leveled out their consumption patterns.

“That was the big adjustment that gets the population back to being more or less sustainable,” Stevenson says. “It was like telling today’s corporate head that the company can’t afford the million-dollar remodel of his office. But it didn’t matter because BANG, the Europeans arrive with their dirty diseases.” And that, Stevenson says, was the final nail in the coffin.

Posted by Gregory LeFever at 12:51 PM