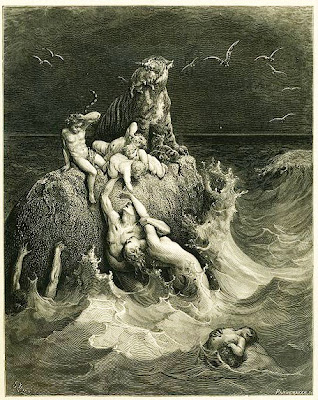 Noah's Flood, or The Deluge, by Gustave Dore.
Scientists now think the ancient flood that’s the basis for the Biblical story of Noah’s Ark was not nearly as large or deep as earlier believed.

Researchers generally agree that, during a warming period about 9,400 years ago, an onrush of seawater from the Mediterranean spurred a connection with the Black Sea. A previous theory said the Black Sea rose up to 195 feet (60 meters), possibly burying villages and spawning the tale of Noah's flood and other inundation folklore.

But the new study ~ largely focused on relatively undisturbed underwater fossils ~ suggests a rise of no more than 30 feet (10 meters).

Marine geologist Liviu Giosan and colleagues carbon-dated the shells of pristine mollusk fossils, which the researchers say bear no evidence of epic flooding. Found in sediment samples taken from where the Black Sea meets the Danube River, the shells "weren't eroded, agitated, or moved," said Giosan, of the Woods Hole Oceanographic Institute in Massachusetts. "We know the mud is exactly the same age as the shells and so can determine what the sea level was about 9,400 years ago."

The results suggest the Black Sea rose 15 to 30 feet (5 to 10 meters), rather than the 150 to 195 feet (50 to 60 meters) first suggested 13 years ago by Columbia University geologist William Ryan and colleagues.

Noha's flood is a historical truth. I
think it really happened. All Jews, Christians and Muslims believe it.